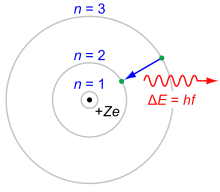 The Planck constant (denoted h, also called Planck's constant) is a physical constant that is the quantum of action, central in quantum mechanics.

First recognized in 1900 by Max Planck, it was originally the proportionality constant between the minimal increment of energy, E, of a hypothetical electrically charged oscillator in a cavity that contained black body radiation, and the frequency, f, of its associated electromagnetic wave.

A schematization of the Bohr model of the hydrogen atom. The transition shown from the n = 3 level to the n = 2 level gives rise to visible light of wavelength 656 nm (red), as the model predicts.