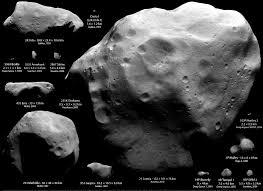 Asteroids are small, airless rocky worlds revolving around the sun that are too small to be called planets. They are also known as planetoids or minor planets. In total, the mass of all the asteroids is less than that of Earth's moon.

But despite their size, asteroids can be dangerous. Many have hit Earth in the past, and more will crash into our planet in the future.

That's one reason scientists study asteroids and are eager to learn more about their numbers, orbits and physical characteristics. If an asteroid is headed our way, we want to know that.